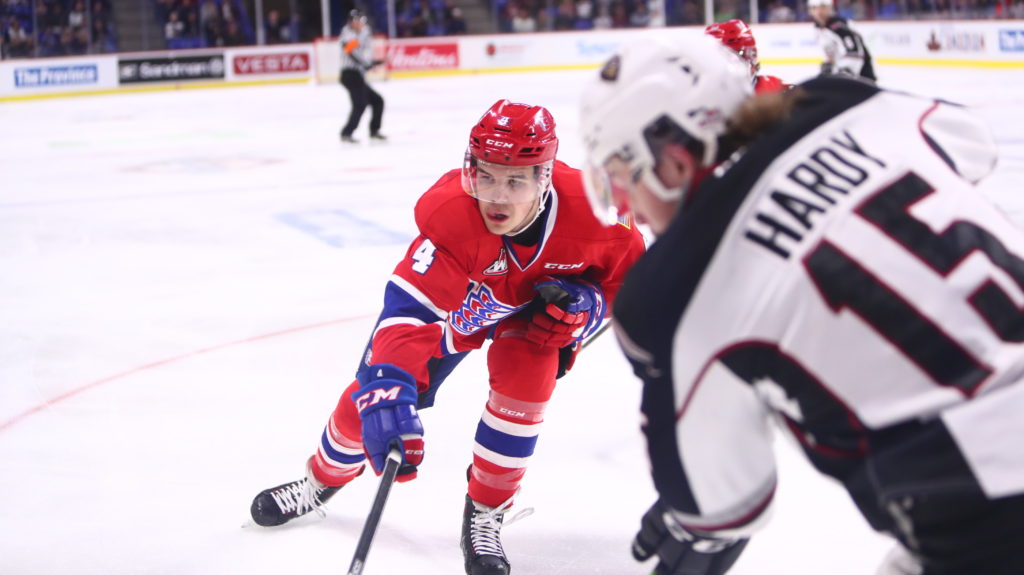 LANGLEY, B.C. — The Vancouver Giants scored four goals in under four minutes of play during the third period on their way to a 4-2 win over the Spokane Chiefs on Saturday night in Langley, B.C. The Chiefs trail 2-0 in the best-of-seven Western Conference Championship and will return to Spokane Arena on Tuesday and Wednesday for Game 3 and Game 4.

“In the playoffs, it doesn’t matter if you lose by ten… it doesn’t matter how you lose,” said Chiefs’ head coach Dan Lambert after the game. “At the end of the day, (Vancouver) got a win. We need to find a way to play one solid hockey game for 60 minutes.”

Defenseman Noah King got the scoring started late in the first period as Riley Woods found him at the left point after the Chiefs forced a turnover in Vancouver’s end. King flipped the puck toward the net and it found its way through, beating Giants netminder David Tendeck to make it 1-0 with just 19 seconds remaining in the opening frame. The goal was King’s first of the postseason.

Spokane added on early in the second – mirroring King’s goal on the other end of the intermission at 19 seconds in – as San Jose Sharks prospect Jake McGrew fired a puck on net from the right wing. Tendeck couldn’t handle it cleanly and it fell behind him, where Los Angeles Kings prospect Jaret Anderson-Dolan was waiting to tap it in.

Vancouver cut the Chiefs’ lead to one goal at 5:15 of the third, taking advantage of a quirky bounce off the glass in the right corner. The puck was rimmed around the right side but ricocheted sharply across the front of goaltender Bailey Brkin. Dawson Hold was there to capitalize for his fourth goal of the playoffs.

The Giants evened things at 7:11, burying a 3-on-1 chance after a Spokane rush the other way. This time it was team captain Jared Dmytriw finishing it on a rebound to make it 2-2.

Vancouver continued to buzz, taking the lead as Dmytriw scored just 22 seconds later for his second of the night and sixth of the playoffs. They added their fourth goal of the night at 8:36 as Yannik Valenti capitalized on a power play for his first goal. In all, the Giants scored four goals in 3:21, energizing the crowd of 4,746 in Langley.

“I think we competed harder today,” added Lambert. “We’re going home now. We need to find a way to win a hockey game.”

The 2019 WHL Western Conference Championship continues on Tuesday, April 23 and Wednesday, April 24 at Spokane Arena. Tickets for are available online, over the phone at 509-535-PUCK and in-person at the Chiefs’ Ticket Office.