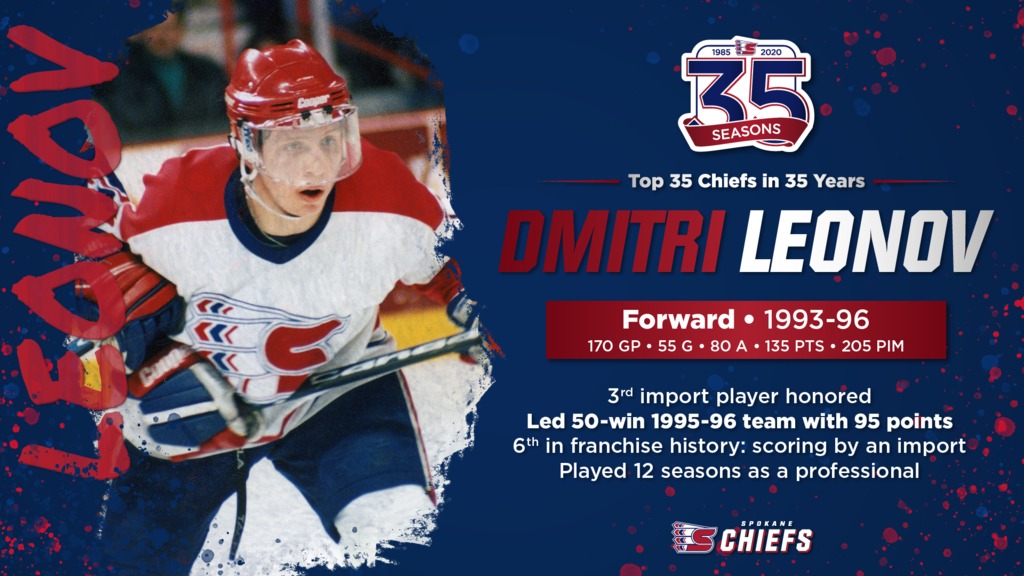 Offensive impact from Russian-born players was the standard for the Spokane Chiefs in the early 1990’s and with their second-ever selection in the CHL Import Draft, Spokane nabbed Dmitri Leonov 14th overall in 1993. From Chelyabinsk in central Russia, Leonov becomes just the third import player on the Top 35 in 35 list, joining fellow Russian Valeri Bure and Austrian Michael Grabner.

Leonov’s first two seasons resulted in 17 combined goals and 40 combined points. He broke out in the 1995 playoffs as a 19-year-old, averaging a point per game while scoring six goals and adding five assists as the Chiefs came within one game of the conference finals. As an example of his rugged, hard-nosed style, Leonov added 25 penalty minutes.

It wasn’t until his 20-year-old overage year when Leonov’s full impact was truly fulfilled. In their previous 10 seasons, the Chiefs had won more than 40 games just once. But, in team’s first year in the Spokane Arena (1995-96), the franchise set a record with 50, thanks in large part to Leonov and his team-leading 95 points. Wearing an “A” as an alternate captain, he appeared in all 72 regular season games another 18 in the playoffs. He finished second on the team in playoff scoring with 10 goals and 21 points, helping Spokane advance to the league finals for just the second time in franchise history.

Amongst import players, he is sixth all-time in franchise history in scoring and only two other imports, countrymen Bure and Maxim Bets, had more single season points.

Undrafted by an NHL team, Leonov played 12 seasons professionally; the first six in North America and the final six in his home country of Russia before retiring in 2008.

Leonov still makes Spokane his home where he lives with his wife Cara, 18-year-old daughter Alyson and 13-year-old son Jeff. He is currently an Electrical Engineer at Coffman Engineering.