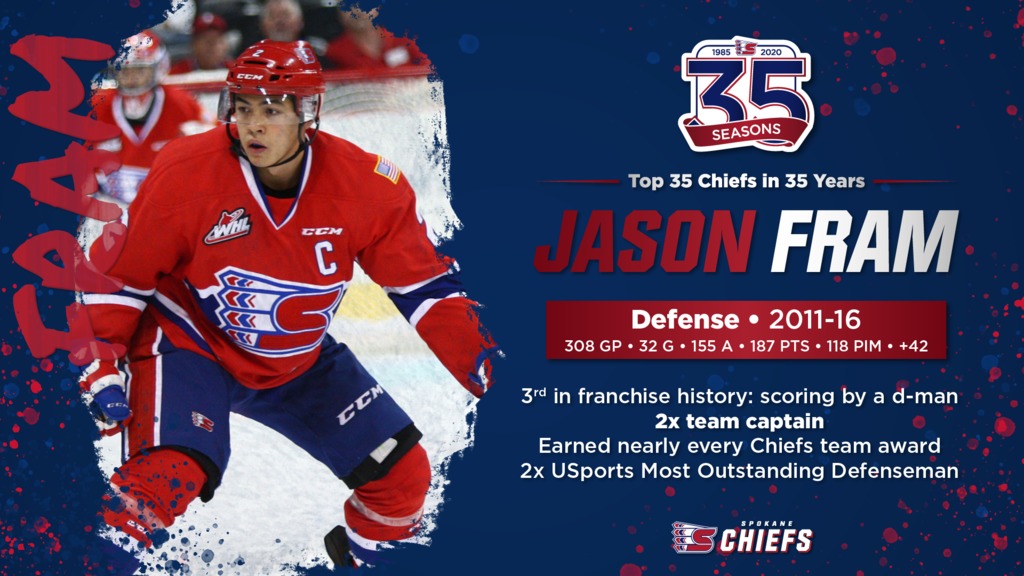 Jason Fram generated three of the most productive offensive seasons from the blueline in Spokane history, recording 165 combined points from 2013-16. His 187 career points as a defenseman are third in franchise history behind Brenden Kichton (268) and Ty Smith (190 as of November 20, 2019). He also joins Kichton and Smith as the only defenseman with more than 50 assists in a season twice with 51 in 2013-14 and 53 (leading all WHL rearguards) in 2014-15. His 154 career assists are tied for 13th in franchise history among all skaters.

Fram has the distinction of being named the Chiefs’ Scholastic, Ken Rabel Most Sportsmanlike, Players’ Player, Defenseman (twice) and Player of the Year in his five year career. The Chiefs’ eighth-round selection in the 2010 WHL Bantam Draft, he wore the captain’s “C” from 2014-16, becoming one of seven two-time captains in franchise history. He was named a WHL Western Conference Second Team All-Star in 2015-16.

A B.C. native, Fram took advantage of his WHL education package to attend the University of Alberta, where he was named USports Most Outstanding Defenseman twice (2018 and 2019) while earning three conference championships (2017, 2018, 2019) and the 2018 National Championship. He is currently in Beijing, China playing for the Kunlun Red Star of the Kontinental Hockey League (KHL).