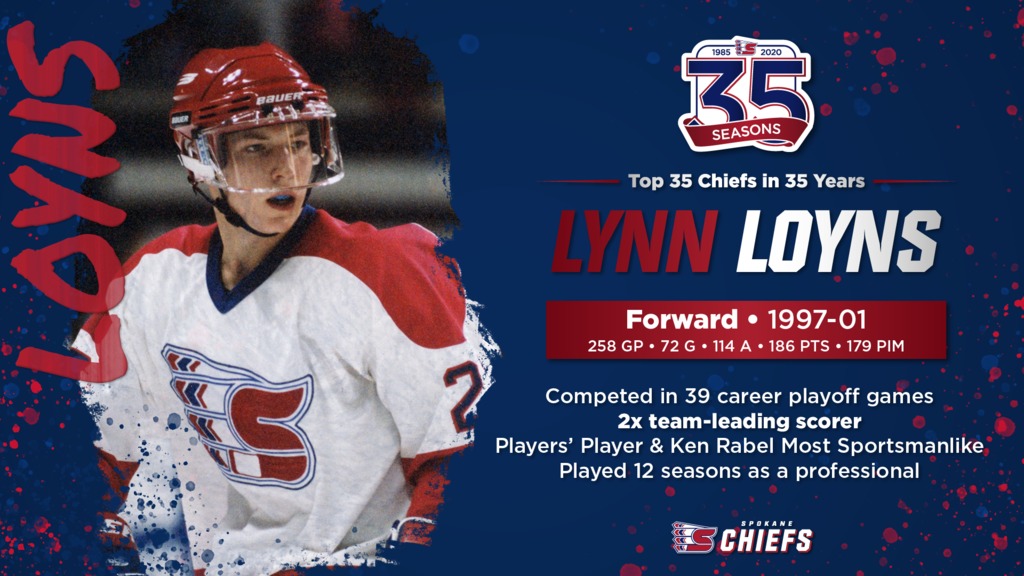 If the Chiefs were looking for value late in the 1996 WHL Bantam Draft, they found it in spades when they selected Lynn Loyns from Naicam, Saskatchewan in the 10th round. Loyns would eventually lead the Chiefs in scoring twice and become a three-time 20-goal scorer, including a career high 31 in his final season. By the end of his career, Loyns competed in 39 playoff games, three Western Conference Finals, a WHL Final and a Memorial Cup.

If numbers alone carry players into becoming a fan favorite then Loyns was already set, but it was his style of play and leadership qualities that puts him on the Top 35 in 35. He debuted as a Chief as a 16-year-old for the 1997-98 season, the year Spokane hosted the Cup, appearing in 49 regular season and 13 playoff games. He played in all four Memorial Cup games. The following season, Loyns led the team in scoring for the first time with 50 points.

Finally, as a 19-year-old, Loyns led the team in scoring one more time with 31 goals and 73 points in 66 games, guiding Spokane to the Western Conference Finals. He was named the Chiefs Players’ Player as well as the Ken Rabel Most Sportsmanlike Player of the Year.

Prior to the 2001-02 season, Loyns signed a free agent contract with the San Jose Sharks to begin a 12-year professional career that took him to the NHL, Germany, Italy and England. He played 34 NHL games with the Sharks and the Calgary Flames. He eventually completed his MBA with Distinction at the University of Derby Business School while finishing his playing career with the Nottingham Panthers in England.