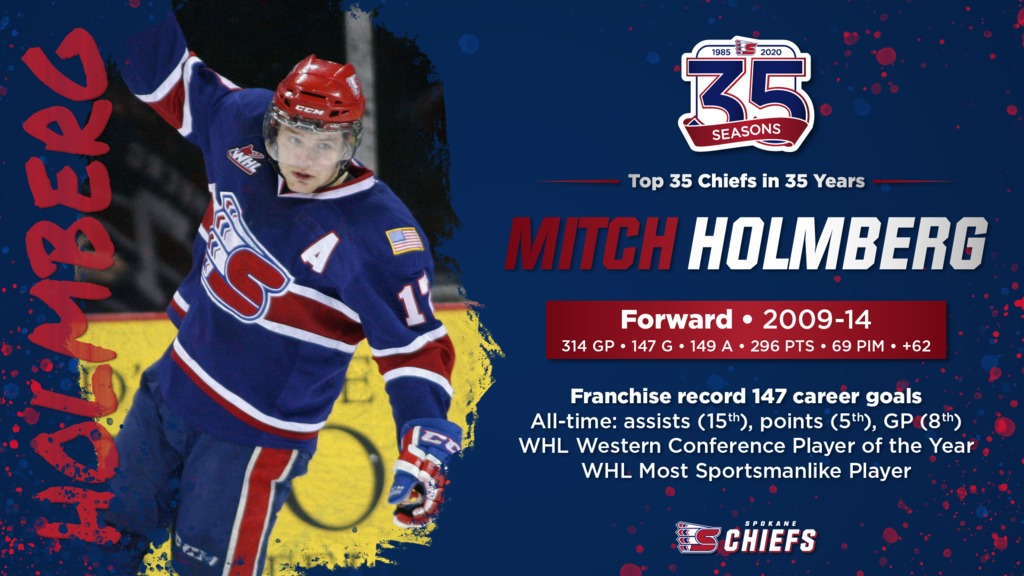 In the 35-year history of the Spokane Chiefs, no player has scored more goals than Mitch Holmberg’s 147.

He is one of only five players to score more than 60 in a season, tallying 62 as a 20-year-old in 2013-14. It was the first time since 1992-93 that a Chief had crested the 60-goal milestone as he led the WHL in overall scoring, adding 56 assists for 118 points. He scored six hat tricks and posted 10 four-point games, including three in the first three games of the season. Holmberg was eventually named the Western Conference Player of the Year and Most Sportsmanlike Player of the Year.

He won the Chiefs’ Ken Rabel Most Sportsmanlike Player of the Year three times as an 18-, 19- and 20-year-old. His 149 career assists sit 15th in franchise history and his 296 career points are fifth all-time. After being selected with the 21st overall selection in the 2008 WHL Bantam Draft, Holmberg debuted as a 16-year-old in 2009-10 and played 52 games. He jumped from four goals during his rookie season to 15 the following, then 27, 39 and eventually 62. During his final season he played in all 72 games and finished his career with 314, eighth in franchise history.

Holmberg played three seasons professionally and currently lives in Kelowna, B.C. He has scouted for the NHL’s Edmonton Oilers for the last three seasons.