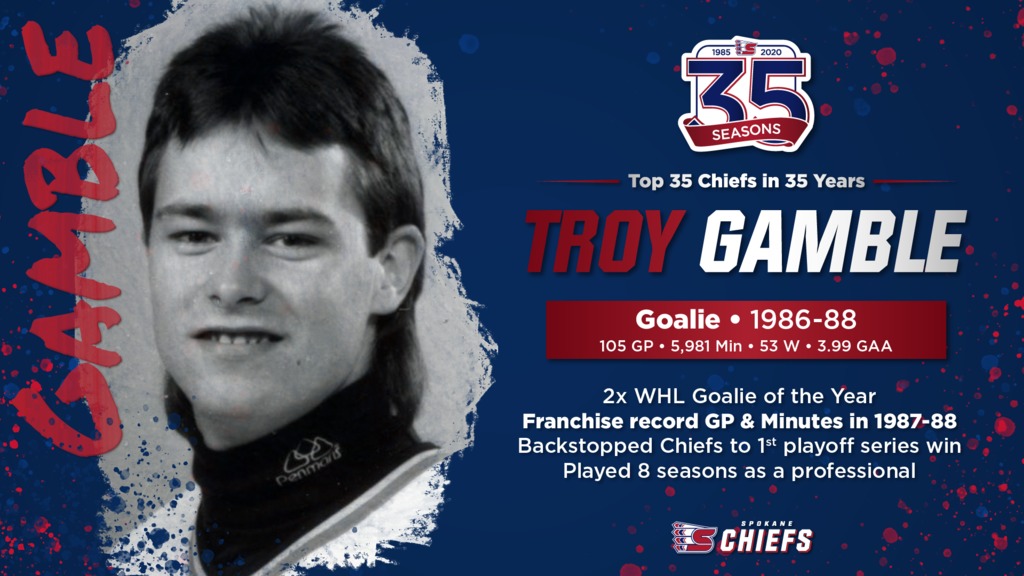 The Chiefs’ first star goaltender, Troy Gamble was already one of the best in the WHL when Spokane acquired him midway through the 1986-87 season. While with the Medicine Hat Tigers, Gamble was named the WHL’s Goaltender of the Year in 1985, a feat he would repeat in 1988 while with the Chiefs. Spokane acquired Gamble as a part of a five-player deal in December of 1986 and he proved his worth in his first career game, stopping 44 shots in a 5-4 win over Kamloops.

Already drafted in the second round of the NHL draft by the Vancouver Canucks in 1985, Gamble spent his final one and a half WHL seasons with Spokane. Despite the relatively short tenure as a Chief, he appeared in 105 games including 67 in 1987-88. That total and the resulting 3,824 minutes played during the regular season are still franchise records. His career totals are both in the top 10 all-time. Gamble missed one game as a 20-year-old due to a call-up from the Vancouver Canucks. He helped the Chiefs win their first ever playoff series, an eight-game victory over Victoria, during which the goaltender stopped 51 shots in Game 6.

Gamble is one of five goaltenders to win the league’s Del Wilson Trophy as Goaltender of the Year more than once and the only to win it for two separate franchises.