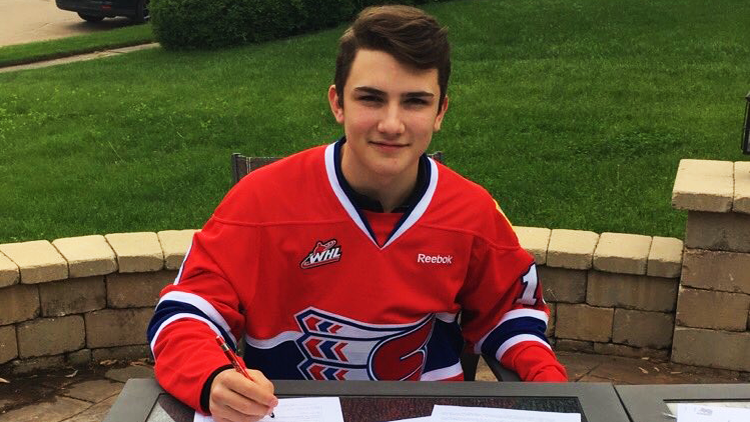 SPOKANE, Wash. – The Spokane Chiefs announced today that forward Luke Toporowski, chosen eighth overall in the 2016 WHL Bantam Draft, has signed a Standard Player Agreement and committed to playing for the Chiefs.

“I’m very proud to officially be a Spokane Chief,” Toporowski said. “Signing with the Chiefs is a dream come true and I can’t wait to get to camp in August.”

Toporowski, a 5-foot-10, 163-pound forward out of Bettendorf, Iowa, became the first American-born player selected in the first round of the WHL Bantam Draft since 2009, when the Everett Silvertips took future fourth-overall NHL Entry Draft pick Seth Jones with the 11th pick.

“We’re very excited to have Luke sign his player agreement and commit to joining our team,” said Chiefs’ General Manager Tim Speltz. “We expect Luke to be a key contributor for our team in the future and this is the first of many steps in that process.”

“Luke is a dynamic forward with the size and skill to be a difference maker in our league,” Speltz continued. “Obviously, our familiarity with the Toporowski family helped us evaluate Luke’s overall character, but he earned his position as the eighth pick with his talent and hard work.”

In 20 games with the Chicago Mission Bantam Major AAA program of the High Performance Bantam Hockey League, Toporowski scored 22 goals and added 11 assists. He was also the top scorer at the 2015-16 Pat Quinn Classic Bantam Elite Tournament in Burnaby, B.C.