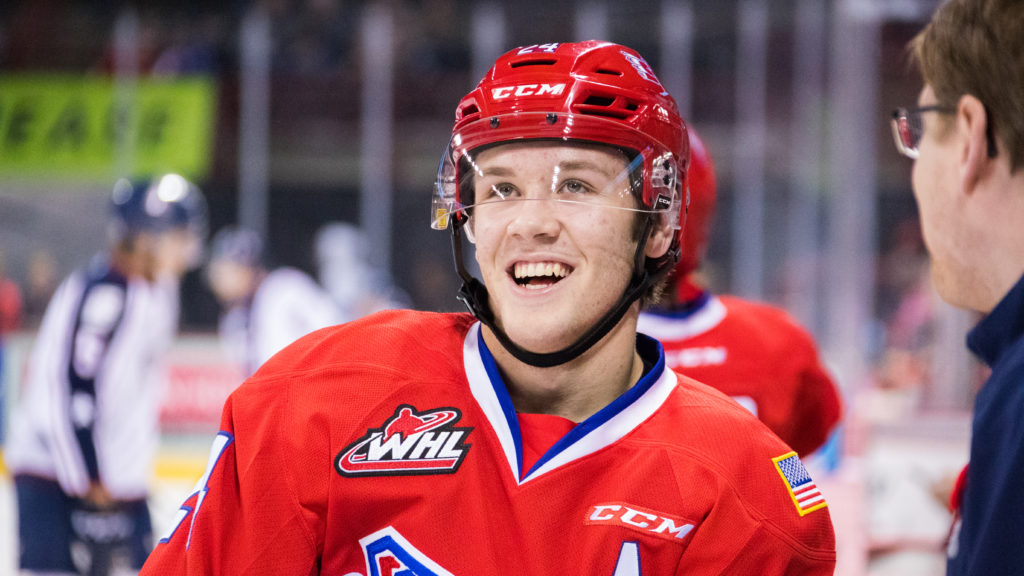 SPOKANE, Wash / TORONTO, Ont. – Spokane Chiefs defenseman Ty Smith has been named to the 2018 Sherwin-Williams CHL/NHL Top Prospects Game, as announced on Wednesday, Dec. 13. The game, which will take place in Guelph, Ontario on Jan. 25, features the 40 top prospects from the CHL heading into next summer’s 2018 NHL Entry Draft.

Smith, 17, is in his second year with the Chiefs after a dynamic rookie campaign during which he ranked 13th among all WHL rookies and 3rd among 16-year-olds with 32 points (5G-27A). His rookie year production ranked 2nd among 16-year-old defensemen in Chiefs franchise history.

The Lloydminster, Alberta product has continued his success this season, posting five goals and 25 assists for 30 points (t-6th among WHL defensemen) through 31 games while earning a +13 rating. Smith earned an “A” rating from the NHL’s Central Scouting Service and has been listed as a top 10 draft prospect by multiple media publications, including The Hockey News and TSN.

Smith’s nomination marks the second-straight season the Chiefs have had a representative at the prestigious event. Kailer Yamamoto competed last season and shined in both the skills competition (earning top-three finishes in multiple categories) and the game, where he scored a goal and added an assist for Team Orr.