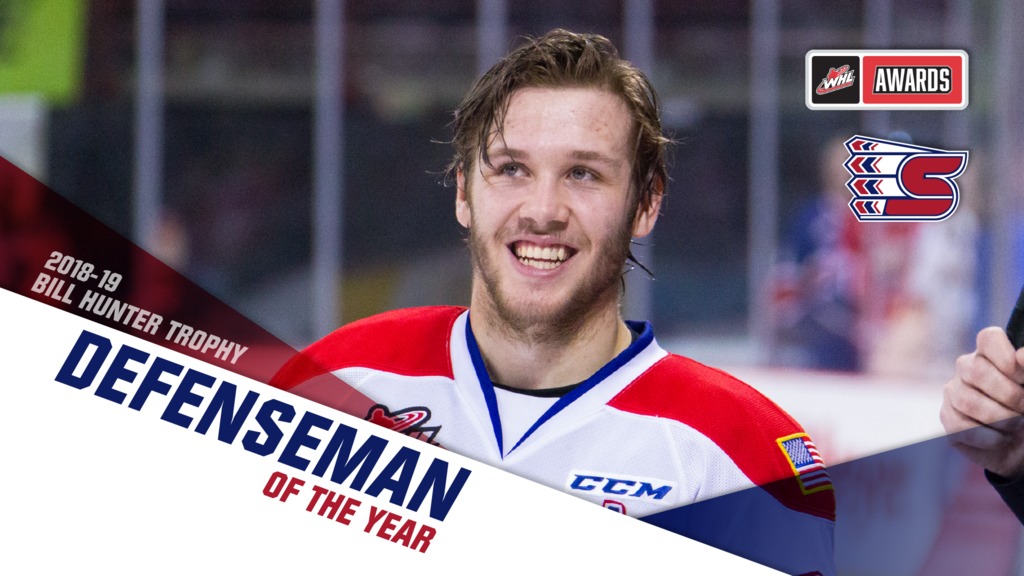 Red Deer, Alta. — Spokane Chiefs defenseman Ty Smith was awarded the Bill Hunter Trophy as the 2018-19 WHL Defenseman of the Year on Wednesday in Red Deer, Alberta. Smith is the second ever Chief to be given the honor, joining Brenden Kichton (2012-13).

“It means a lot to me,” said Smith. ” I’m really thankful to win this award, especially considering all the great defenseman in this league.”

Smith, who shared the Chiefs’ captaincy with forward Jaret Anderson-Dolan, was stellar in his third WHL campaign, posting seven goals and 62 assists for 69 points during the regular season. Among blueliners, Smith led in assists and was 4th in overall points despite playing just 57 games. He posted 22 multi-point games, highlighted by a four-assist night at Kootenay on January 5. The Lloydminster, Alta. product added nine points (1G-8A) during the Chiefs’ 15-game playoff run.

Logging heavy minutes, Smith was the catalyst for the league’s best power play unit, piling up 26 assists and 31 total points with the man advantage during the regular season, then seven more helpers in the postseason.

A former first-overall bantam pick (2015), Smith was selected in the first round (17th overall) of the 2018 NHL Entry Draft by New Jersey. He was one of the final players cut from the Devils’ training camp roster in late September.

After a strong start to the season, he was selected to compete for his country at the 2019 IIHF World Junior Championship in Vancouver and Victoria, B.C. He recorded three assists in five games for Team Canada, including Player of the Game honors in Canada’s 5-1 preliminary round win over the Czech Republic.

Smith is no stranger to WHL honors; he has twice been named to the Western Conference First All-Star team and was the league’s Scholastic Player of the Year last year. Adding to multiple team awards earned during his career, he was named the Chiefs’ 2018-19 Most Valuable Player, Defenseman of the Year and Most Sportsmanlike Player.