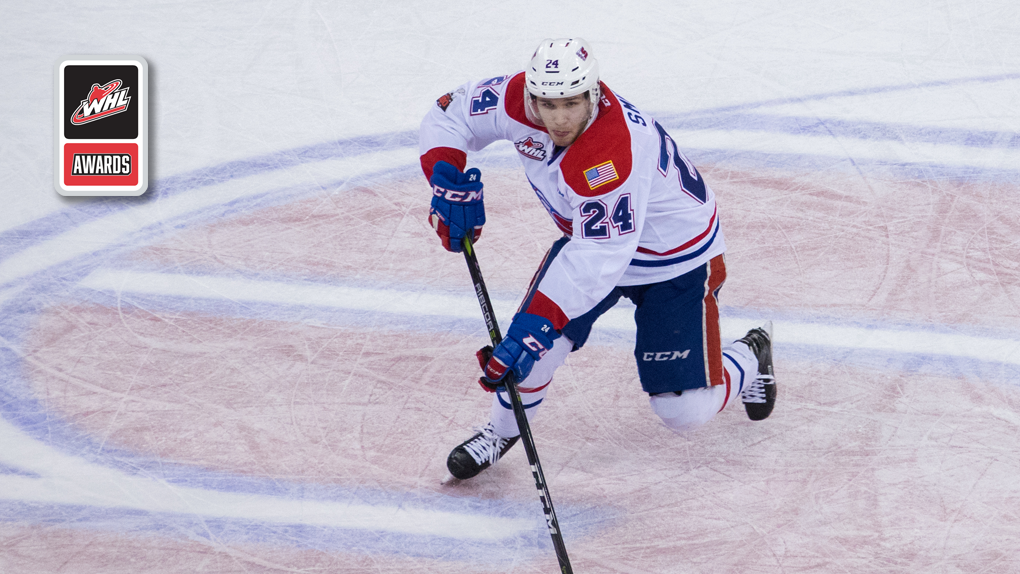 Red Deer, Alta. / Spokane, Wash. – Spokane Chiefs defenseman Ty Smith has won the Daryl K. Seaman Memorial Trophy as the WHL’s Scholastic Player of the Year, as announced by the league on Wednesday. Smith is the third ever Chief to win the award.

“It means a lot. Growing up as a kid, my family was pretty strict with me on school and hockey,” said Smith. “I knew the better I did in school and the faster I got stuff done, the more time I’d have on the ice.”

Playing in his second full season with the Chiefs, Smith recorded 73 points (14G-59A) in 69 games, finishing second among all WHL defensemen in scoring during the 2017-18 WHL regular season. His 73 points are the most by a first-year NHL draft eligible defenseman since the 2001-02 season (Ian White, Swift Current; 79) and are the 6th most ever by a Chiefs defenseman in a single season. He earned WHL Player of the Week honors once and set a new franchise record for points in a game by a defenseman with seven (2G-5A) vs. Prince George on Feb. 23.

The nominees for the 2017-18 Daryl (Doc) K. Seaman Memorial Trophy as the WHL Scholastic Player of the Year are @wouters_44 of the @BladesHockey and @_tysmith_24 of the @spokanechiefs! #WHLAwards pic.twitter.com/BpDuLeqOfH

Making the move from Lloydminster, Alta. to Spokane, Wash. for the 2016-17 school year, Smith maintained a 3.57 GPA during his studies south of the border. The 5-foot-10, 170-pound defenseman scored top marks throughout his time in high school, posting a 98 percent in Computer Applications B, a 95 percent in Anatomy and Physiology A and a 91 percent in Physics – Year 1A.

He also registered an 88 percent in Pre-Calculus A and an 87 percent in English 11A while also earning an 84 percent in Bridge to College English 12A and 83 percent in AP Statistics A.

“It’s definitely tough, but we have a great education advisor in Spokane in Joe Everson. He and our tutors help us out a lot. It helps our team as a whole.”

The winner of the 2017-18 Daryl (Doc) K. Seaman Memorial Trophy as the WHL Scholastic Player of the Year is @_tysmith_24 of the @spokanechiefs! #WHLAwards pic.twitter.com/4fmlpXg4AD

In 1996, the WHL Scholastic Player of the Year Trophy was named in honor of Daryl K. (Doc) Seaman, a pioneer in promoting higher education and hockey as well as a leading supporter of the WHL’s education and scholarship programs. It is awarded annually to the WHL’s Scholastic Player of the Year and recognizes a player who has demonstrated academic excellence while competing in the WHL.

Former Chiefs to win the award include Reid Gow (2011-12) and Kyle Rossiter (1997-98). Rossiter went on to win the CHL Scholastic Player of the Year award as well.