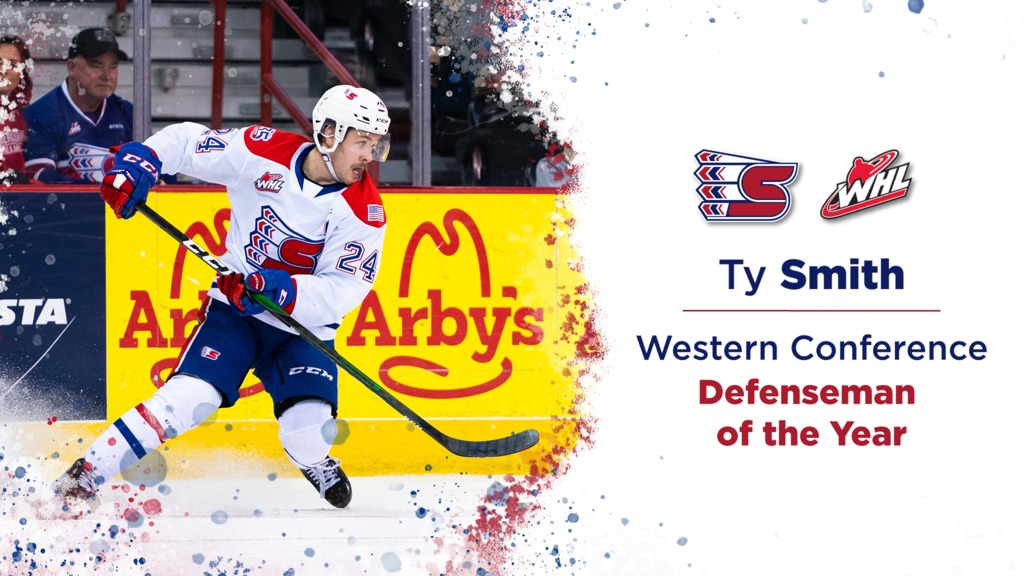 Spokane, Wash. — Spokane Chiefs defenseman and New Jersey Devils prospect Ty Smith has been named the Western Hockey League’s Western Conference Defenseman of the Year, as announced by the league on Monday. Smith is one of two finalists, joining Calen Addison of the Lethbridge Hurricanes, for the Bill Hunter Memorial Trophy, awarded annually to the league’s top rearguard.

A first-round pick by the New Jersey Devils in the 2018 NHL draft, Smith will leave Spokane as one of the most decorated defensemen in franchise history. Smith earned the Bill Hunter Memotial Trophy last year on his way to CHL Defenseman of the Year recognition. Brenden Kichton (2012-13) is the only other Chief to ever receive the honor.

After an extended stay with the Devils during the NHL preseason, Smith rejoined the Chiefs in early October, earning WHL Player of the Week honors in his first opportunity back after racking up six points (3G-3A) in three games.

The two-time captain continued to log heavy minutes and match up against the opposition’s best players, recording four goals and 13 assists before departing to represent Canada at the 2020 IIHF World Junior Championship. Smith was honored as an alternate captain at the tournament, helping guide the Canadians to their 18th gold medal and third in the last six years.

Upon return from World Juniors, Smith’s production took off. In 25 games from his first game back on Jan. 10 through the end of the season, he torched the league for 42 points (15G-27A) and a +34 rating, being held off the scoresheet just five times. In total, the Lloydminster, Alta. product finished with 59 points (4th among WHL defensemen) on 19 goals (3rd) and 40 assists (7th) while going plus-49 (3rd among all WHL skaters). He recorded 16 multi-point efforts including six with three or more.

Highlighting the season was his February 28 performance versus Seattle, during which Smith broke his own franchise record for points in a game by a defenseman with eight, including his first career hat trick and five assists. It was just the fifth hat trick by a blueliner in Chiefs history and tied Smith’s mark from 2018 (2G-5A vs. Prince George on Feb. 23) for most assists by a defenseman in a single game.

Smith was named the Chiefs’ John “Hitman” Hern Defenseman of the Year late last month, along with co-winner Filip Kral.