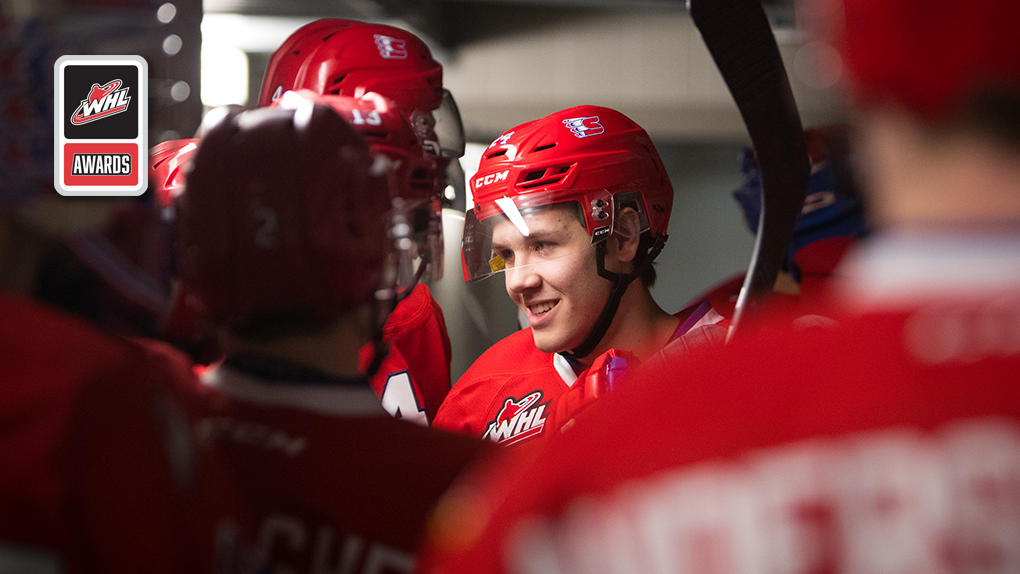 Calgary, Alta. / Spokane, Wash. – Spokane Chiefs defenseman Ty Smith has been named WHL Western Conference Scholastic Player of the Year, as announced by the Western Hockey League on April 11. He is also nominated for the Daryl K. (Doc) Seaman Memorial Trophy as the WHL’s Scholastic Player of the Year, which will be awarded at the 2018 WHL Awards banquet in Red Deer, Alta. on May 2.

Playing in his second full season with the Chiefs, Smith recorded 73 points (14G-59A) in 69 games, finishing second among all WHL defencemen in scoring during the 2017-18 WHL regular season. His 73 points are the most by a first-year NHL draft eligible defenseman since the 2001-02 season (Ian White, Swift Current; 79) and are the 6th most ever by a Chiefs defenseman in a single season. He earned WHL Player of the Week honors once and set a new franchise record for points in a game by a defenseman with seven (2G-5A) vs. Prince George on Feb. 23.

Making the move from Lloydminster, Alta. to Spokane, Wash. for the 2016-17 school year, Smith has maintained a 3.57 GPA during his studies south of the border. The 5-foot-10, 170-pound defenseman scored top marks throughout his time in high school, posting a 98 per cent in Computer Applications B, a 95 per cent in Anatomy and Physiology A and a 91 per cent in Physics – Year 1A.

Smith is currently ranked 14th among North American skaters by NHL Central Scouting in their midterm rankings ahead of the 2018 NHL Entry Draft.

“Ty truly epitomizes what it means to be a learner,” said Chiefs Education Advisor Joe Everson. “He is curious, diligent, willing to persevere, and talented. He is also a natural leader by example in the classroom. Despite the time commitment athletics demand of him, Ty manages to balance his workload and maintain a very positive attitude, all while outperforming many of his peers.

“His leadership centers on quietly modeling and contributing to the group in any setting.”

Smith was originally selected by the Chiefs with the first overall pick in the 2015 WHL Bantam Draft.

In 1996, the WHL Scholastic Player of the Year Trophy was named in honor of Daryl K. (Doc) Seaman, a pioneer in promoting higher education and hockey as well as a leading supporter of the WHL’s education and scholarship programs.   It is awarded annually to the WHL’s Scholastic Player of the Year and recognizes a player who has demonstrated academic excellence while competing in the WHL.

Previous Chiefs winners include Reid Gow in 2012 and Kyle Rossiter in 1998. Rossiter also won CHL Scholastic Player of the Year.

Smith is joined by Eastern Conference nominee Chase Wouters of the Saskatoon Blades.