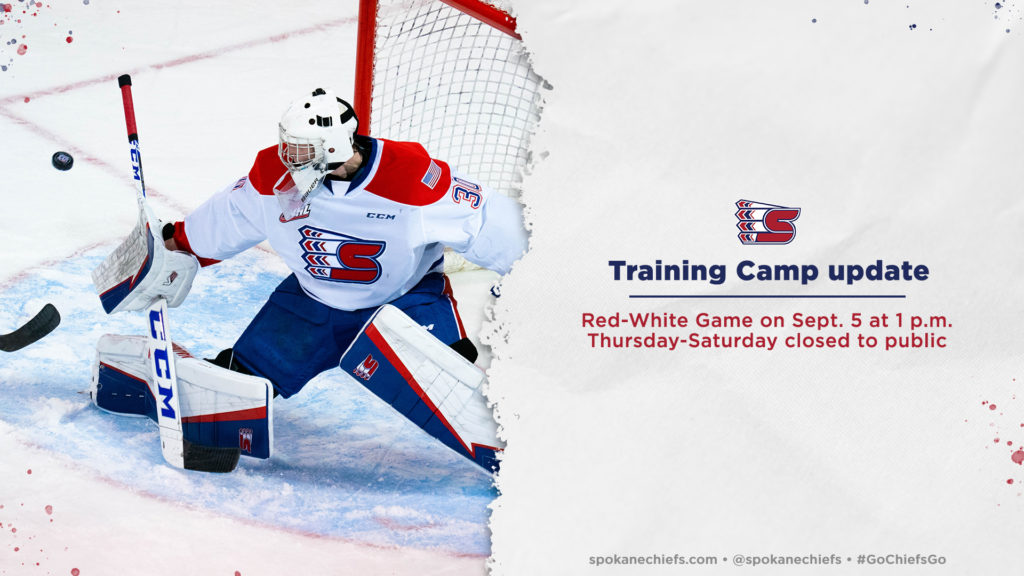 Spokane, Wash. — The Spokane Chiefs announced on Friday an update regarding the club’s annual training camp at Spokane Arena, which will take place September 2-5. Training camp scrimmage sessions will be closed to the public while the annual Red-White Game on Sunday, September 5 will be open and free to attend.

“Given the current health environment and protocols, we have decided to close the Thursday through Saturday scrimmages to the public,” said Chiefs president Mark Miles. “The health and safety of our players and their families is our top priority. The Red-White Game will offer fans the opportunity to see this year’s team for the first time while also putting us in a position to provide a successful, safe event with proper staffing, security and health protocols.”

The Chiefs expect approximately 55 players to attend camp, offering coaches and scouts the opportunity to evaluate talent after the long offseason break.

“Training camp is always an exciting time for both our players and our staff to get a first sense of what our team will look like this season,” said general manager Scott Carter. “It’s also such a good opportunity to welcome hockey families to Spokane, sometimes for the first time, so they can explore the city.”

The annual intrasquad Red-White Game will take place at 1 p.m. on Sept. 5, pitting approximately 40 Chiefs players and prospects against each other to close out the four-day event. The team will trim the roster from there to begin their WHL preseason schedule as they prep to open the regular season on October 2 versus Tri-City.

Masks will be required at the Red-White Game for all attendees five years old and older.