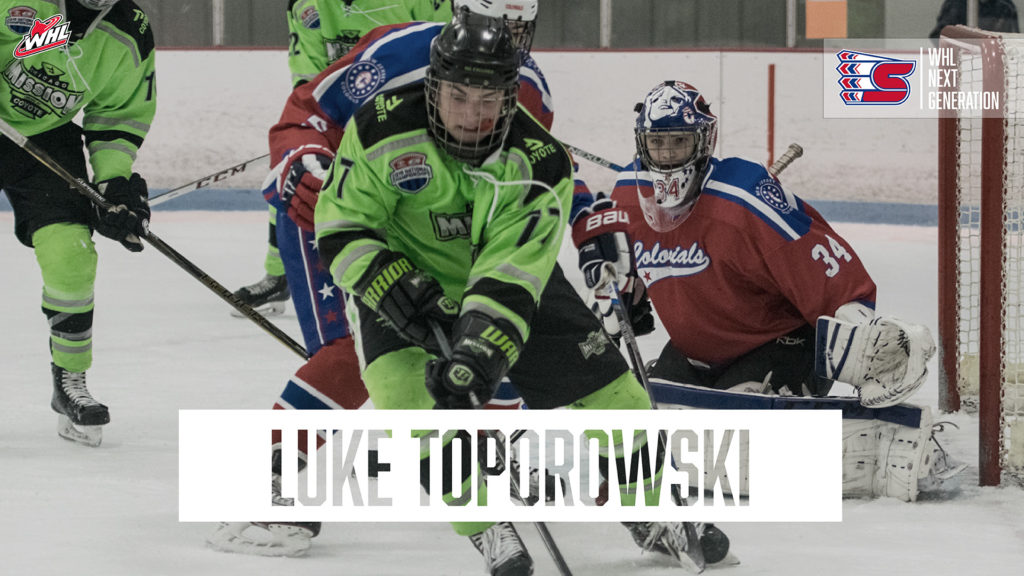 WHL Next Generation is a 22-part series highlighting a handful of the future stars of the Western Hockey League. From first-round bantam draft picks to later-blooming selections, get to know the names of players set to establish themselves as the newest crop of exciting talent to grace the WHL. From August 1 through September 11, get the inside scoop on the incoming crew of 16-year-olds. View more at whl.ca.

Being a Spokane Chief is more than just playing hockey for Luke Toporowski, it’s a longstanding family tradition.

For two generations, the Toporowski name has been sewn on the back a Spokane Chiefs jersey and Luke intends to keep the tradition going.

This season, Luke, who was drafted by the Chiefs in the first round, eighth overall at the 2016 WHL Bantam Draft, will have the opportunity to become the fourth member of the Toporowski family to play for Spokane.

Luke’s father, Kerry, patrolled the blue line at the old Spokane Coliseum back in the early 1990s and was part of the 1991 Memorial Cup-winning team.

A notorious enforcer, Kerry amassed 889 penalty minutes in 130 career games with the Chiefs before going to become a fan favourite with the United Hockey League’s Quad City Mallards in the later stages of his career.

Meanwhile Luke’s uncle, Brad, also played defense for the Chiefs for the first two years of his WHL career before being traded to the Moose Jaw Warriors 12 games into this third season in the league.

Now, Luke’s brother, Jake, is following in his father’s footsteps as part of the Spokane blue line, albeit with a lot fewer penalty minutes.

“I had no words when I got drafted to Spokane. I mean, it’s been the team I’ve wanted to play for ever since I was two-years old, three-years old,” Luke said.

If he makes the team, though, Luke won’t man the blue line like his brother, father and uncle before him.

That’s not to say he’s one to shy away from the physical aspect of the game, though.

“I’m a power forwrad that likes to use skill and be physical at the same time,” he said.

Standing 5-foot-10 and weighing in at 163 pounds, Luke has made a name for himself as a promising and dynamic young forward with the Chicago Mission of the High Performance Hockey League.

Last season, the Bettendorf, Ia. product notched 21 points (10 goals, 11 assists) in 20 games as his 16U team made a run to the USA Hockey Nationals.

While his team fell short of a spot in the final at Nationals, Toporowski said he was happy with his play last season.

“Personally, I had a really good season again. My linemates were good to play with, so it went well.”

Check out @spokanechiefs 1st round pick @LukeToporowski getting his summer training in on the S-Drive Performance Trainer! #hardwork pic.twitter.com/qoFB6MbiJf

While the smooth-skating prospect wasn’t able to suit up for any games as a 15-year-old last season, he’s had the opportunity to get a feel for the WHL style of play from watching his brother play.

He also got a brief glimpse into the everyday life of a WHL player from Chiefs training camp last season.

“I got a bit of a taste of what it can be like this coming season. Guys are just a lot bigger – a lot bigger than I am and stronger and faster, but the off-season training I’ve been doing this summer, I feel like it will help me out a lot,” Toporowski said, adding that he’s been working hard to get bigger and stronger.

“I’ve put on probably six or seven pounds just in these couple of months.”

He noted that playing alongside his brother at training camp this year will also help ease any rookie jitters.

“Just him being there – him being at the rink, living with him – it’ll help me out a lot. I can talk to him on the way to practice, on the way to games,” Luke said. “It’ll just help my nerves settle down and just get used to it a lot easier than if I was on my own.”