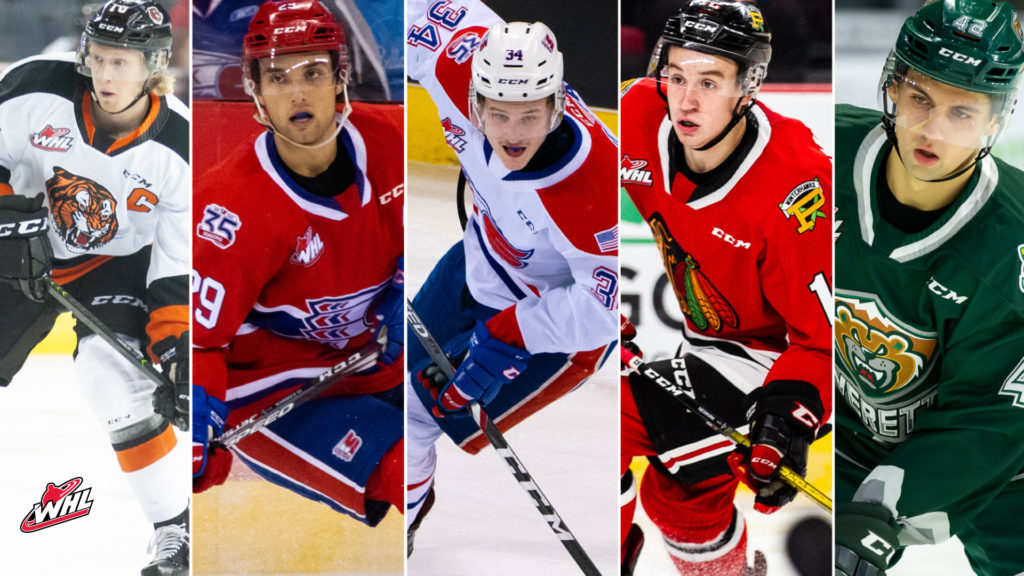 From start to finish, the 2019-20 Western Hockey League Regular Season provided plenty of standout performances both individually and as a team. Starting Friday, April 3, and featuring each Monday and Friday, we’ll reflect on key performers in statistical categories from the regular season that was. Welcome to the 2019-20 WHL Season Rewind. Today, we’re looking at the best point streaks of the season.

Running from December 7, 2019 to January 25, 2020, Minnesota Wild prospect Adam Beckman of the Spokane Chiefs tallied 33 of his 107 points on a league-leading 18-game point streak. That run featured eight games on home ice and 10 on the road. Over that stretch, the Saskatoon, Sask. product recorded 10 multi-point games, including the second five-point game of his WHL career with a hat trick and a pair of assists against the Seattle Thunderbirds on December 14, 2019.

What a performance! @mnwild prospect @AdamBeckman9 of @spokanechiefs is your WHL @CanadianJerky Player of the Month!

Running from November 29, 2019 to January 11, 2020, Chiefs alternate captain Eli Zummack recorded 28 of his 86 points during the 17-game stretch, including seven home games and 10 road contests. A product of Kelowna, B.C., Zummack had eight multi-point games as part of the streak, including a four-point performance that featured two goals and a pair of assists on January 11, 2020 against the Vancouver Giants.

On the road, he recorded 18 points (6G-12A) while he earned 10 points (3G-7A) on home ice. Zummack’s run included an eight-game assist streak, five-game goal streak, and a three-game goal streak.

A stellar season w/ @spokanechiefs for @Eli_Zummack tied him for fourth in conference scoring!

In a 17-game stretch from November 30, 2019 to January 14, 2020, New York Islanders prospect Reece Newkirk recorded more than a third of his 65 points this season with the Portland Winterhawks. The run featured eight home contests and nine road games. A product of Moose Jaw, Sask., Newkirk tallied five multi-point games as part of the 17-game stretch.

Newkirk came as close to an even split as possible with 12 points (9G-3A) on the road and 11 points (4G-7A) while serving as hosts. His streak featured a four-game goal streak, three instances of goals in back-to-back games beyond that streak, and a four-game assist streak.

From December 10, 2019 to January 24, 2020, Medicine Hat Tigers captain James Hamblin nearly recorded a third of his regular season total with 29 points in 16 games. The streak began while the Tigers were on a road trip through Saskatchewan and into Alberta, ultimately featuring 10 road games and six home contests. As part of the streak, Hamblin had seven multi-point games, including a four-goal game on January 18, 2020 and a five-assist game to begin the streak on December 10, 2019.

He tallied a majority of points on the road, recording 18 points (2G-16A) away from the Canalta Centre. However, Hamblin scored the majority of his goals on home ice as part of the 11 points (9G-2A) he tallied there. The point streak started with a five-game assist streak and featured a four-game assist streak later on. On Thursday, the Edmonton, Alta. product signed a two-year AHL contract with the Bakersfield Condors.

From October 11, 2019 to November 30, 2019, Montreal Canadiens prospect Cole Fonstad recorded 22 of his 74 points over a 14-game stretch. It began as a member of the Prince Albert Raiders and continued into his time with the Everett Silvertips. The majority of Fonstad’s success came on home ice as the stretch featured over 11 home games and three road matchups. He tallied five multi-point games as part of the run, including the first four games of his streak.

On home ice, he recorded 19 points (2G-17A), adding three assists on the road. Even if the Estevan, Sask. product hadn’t scored a goal in the date range, he still would have kept the point streak as he picked up a helper in each of the 14 games. 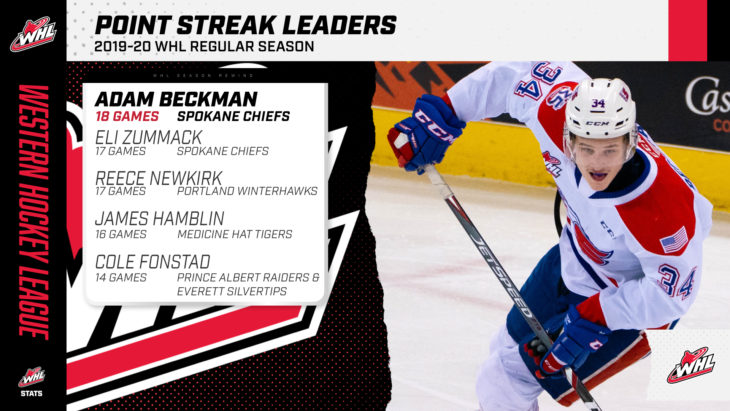