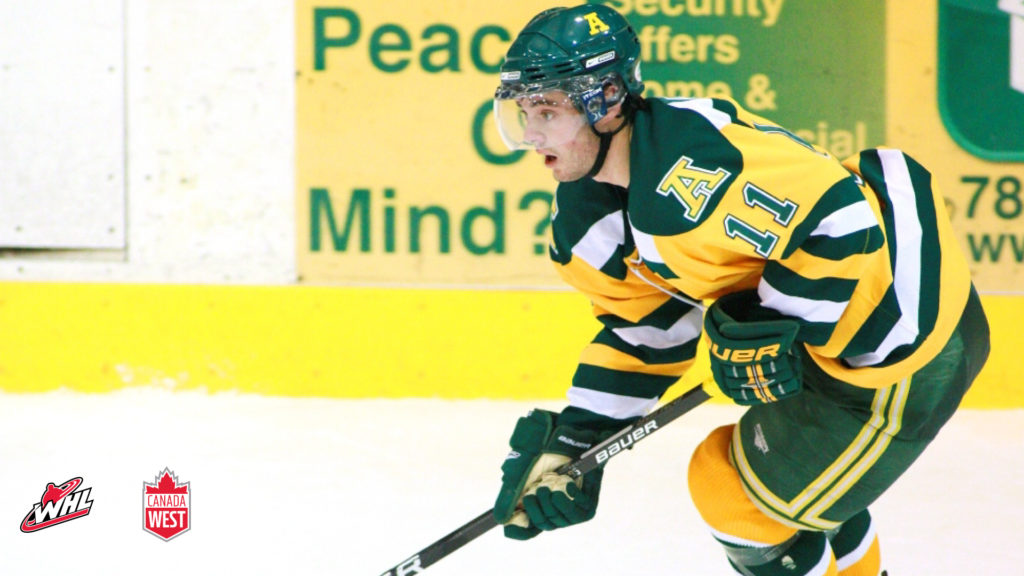 It may have seemed like any other game back on December 2, 2005, but for Derek Ryan it marked the start of his connection with a province that has since fuelled his future success.

Held pointless in that contest, Ryan connected for a goal and an assist in Medicine Hat the following night, adding a pair of helpers in Red Deer a few nights later. At that point, Ryan was midway through his second full season in the WHL and was a key part of the Chiefs’ offence.

By the fall of 2007, roughly 21 months later, Ryan had returned to Alberta once again, this time heading for Edmonton with the University of Golden Bears men’s hockey program.

“We had a lot of success when I was there,” Ryan said of his time with the Golden Bears. “All four years I won Canada West and all four years I went to the national tournament.

“I was lucky enough to win [nationals] my first year. I was a little spoiled. I thought that was going to be the case the whole time, but it was a really fun enjoyable part of my hockey career.”

Over the course of four seasons with the Golden Bears, Ryan had no problem filling the back of the net or the trophy case. However, he also went there with another purpose: higher education. While he accumulated 146 points (58G-88A) in 109 Canada West regular season games, helping the Golden Bears to four Canada West titles and one national championship, he made a point of attaining his Bachelor of Science with Honours in Human Physiology.

Utilizing his WHL Scholarship to pursue his education, Ryan gained peace of mind that he would be prepared for the future regardless of if he stayed on the ice.

“It was really hard to turn down that guarantee of four years of schooling,” Ryan said. “Once I had that in front of me, I really didn’t have much of a choice, because I thought it was so obvious I had to take that.

“It’s not an easy decision and there’s no right answer for every player, but for me it was a no-brainer.”

Ryan’s journey then took him overseas for four more seasons before he returned to North America at 28 with the American Hockey League’s Charlotte Checkers, eventually playing his way up to the National Hockey League’s Carolina Hurricanes. When the opportunity to be a free agent came in the summer of 2018, Ryan returned to Alberta, this time going to Calgary to join the Flames.

He’s since eclipsed the 300-game mark as well as the 50-goal mark for his NHL career. For the 33-year-old, each game and each goal is a reward for the commitment Ryan has put in throughout his career.

“I think I’ve solidified myself,” Ryan said. “I’m on a longer contract here in Calgary where I have a little more job security.

“I think that I’ve secured my position in the NHL, but the NHL is the best league in the world so there’s always players that are in flux and try to take your job. It’s a battle every day.”

Along the way Ryan has taken to also enjoying select matchups, especially against the likes of the Tampa Bay Lightning and Edmonton Oilers where he now faces fellow Spokane products and WHL Alumni in Tyler Johnson and Kailer Yamamoto, respectively. With the Chiefs a staple in eastern Washington, Ryan said each of those matchups makes him appreciate the game of hockey and his roots even more.

“It’s really really cool, especially for a Spokane guy where I consider Spokane a smaller hockey community, even though it’s a bigger city,” Ryan said. “It’s getting better, but there’s not a ton of hockey recognition like you’d see in a city like Calgary or just about any other Canadian city.

As much as he’d like to prolong his time in the NHL, Ryan knows nothing is ever too certain. Having his degree and a worldly experience thanks to the game of hockey, Ryan is at least prepared for the day that future comes.

“I think that it’s really useful and will be useful once hockey is over,” Ryan said of his degree. “Hockey is a great game, I love it, but you can’t play forever.

“There will come a time when I have to either get a real job or whatever position I’m in in life I’ll have to use my degree a little bit. I think more than anything, going through that experience at the U of A, getting my degree taught me a lot of things about life in general, not just the things I learned out of a textbook.”