WJC Round-Up: Yamamoto Scores & Both Chiefs Advance to Medal Round 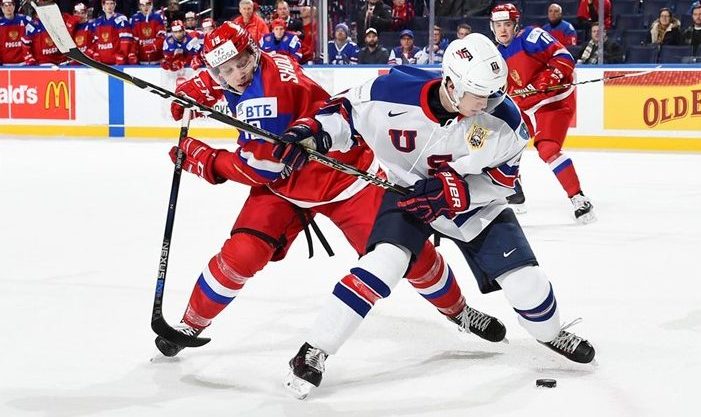 Spokane Chiefs Kailer Yamamoto and Filip Kral both advanced to the semifinals of the 2018 IIHF World Junior Championship in Buffalo, N.Y. on Tuesday, guaranteeing that at least one medal will come back to Spokane.

Kral and the Czechs opened Tuesday’s action with a wild shootout win over Finland, 4-3. The Czechs jumped out to a 1-0 lead in the first period before Finland stormed back for a 2-1 advantage midway through the second. Czech Republic tied it at 2-2 but faced a 3-2 deficit with under four minutes left in regulation. They tied it with the extra attacker to force overtime and shootout, which they won.

Yamamoto and the Americans continued their bid to repeat as champions with a 4-2 win over the Russians in the late game on Tuesday. Team USA never trailed but never felt comfortable in the tightly contested quarterfinal matchup. They took 1-0 and 2-1 leads but the Russians answered each time to tie the game. Forward Kieffer Bellows scored what ended up being the game-winner with 7:29 left in regulation.

Yamamoto scored USA’s second goal, corralling a bouncing rebound before firing it past the diving goaltender while falling to the ice. It was Yamamoto’s second goal and third point of the tournament. He finished with 3 SOG and a +1 rating in 18:26 on the ice.

Up next for both Chiefs is the semifinal round on Thursday, Jan. 4 against round robin group leaders Sweden and Canada. Yamamoto and the Americans will face Sweden at 1 p.m. while Kral and the Czechs will take on Canada at 5 p.m. Both games will be available to watch on NHL Network.