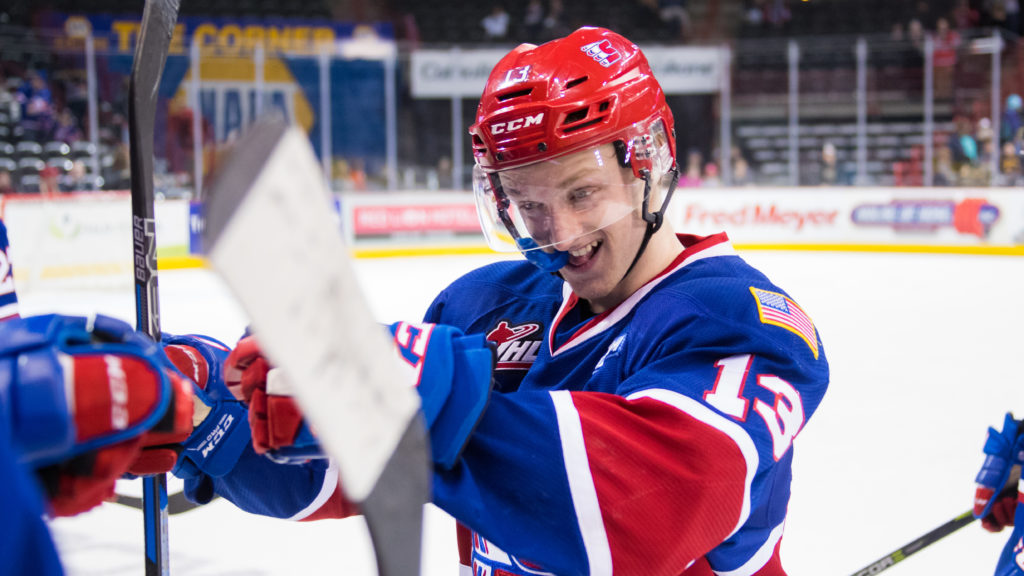 KENNEWICK, Wash. — Forward Riley Woods netted at hat trick midway through the second period, leading the way for the Spokane Chiefs as they cruised to a 7-3 win over the rival Tri-City Americans in pre-season action on Saturday night. The win pushed Spokane’s exhibition record to 3-1-1-0.

After an early power play goal for the Americans, Woods scored his first of the night unassisted, forcing a turnover in front of the Tri-City net before snapping one past goaltender Beck Warm to make it 1-1.

Tri-City responded under a minute later with a goal from Connor Bouchard to make it 2-1 for the Americans heading into the first intermission.

Woods scored off an assist from 2018 WHL Bantam Draft first-round pick Graham Sward at the 4:22 mark of the second to tie the game at 2-2, but Tri-City responded once more, re-taking the lead 34 seconds later with an unassisted goal from Sasha Mutala.

From then on, it was all Chiefs.

Woods filled his hat with a shorthanded score – Spokane’s third of the pre-season – at 9:38 to tie it at 3-3, with 18-year-old forward Michael King finding him from the left corner for the primary assist.

Connor Gabruch, a rookie forward signed by Spokane earlier in the week, made his presence felt immediately with his first goal as a Chief at 17:44 of the second to give the visitors a 4-3 lead into the second intermission.

Spokane piled on in the third, outshooting the Americans 22-4 and scoring three goals – by Matt Leduc (his first of the pre-season), Ethan McIndoe (first) and Adam Beckman (sixth) – to reach the final 7-3 tally.

Bailey Brkin started for the Chiefs in goal and made 13 saves on 16 shots faced while Tri-City’s Warm turned aside 31 of 38. Spokane finished 0-for-3 on the power play and 6-for-7 on the penalty kill.

These two teams will meet for a rematch in Kennewick a week from today to close out each team’s pre-season schedule.