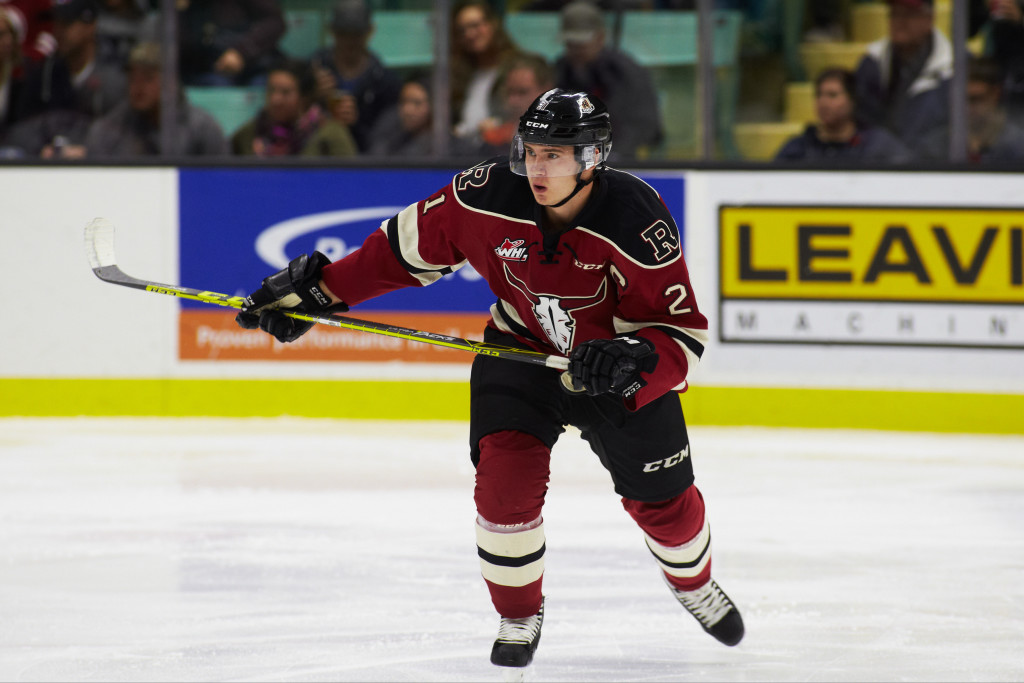 “We feel this trade works well for our organization this year and also helps to build for our future,” said Spokane Chiefs General Manager Tim Speltz. “Wyatt Johnson is a good leader, exemplified by his role as the Red Deer Rebels’ captain. He will contribute offensively and his drive and competitiveness will help our team in a very tough Western Conference and U.S. Division.”

Johnson, a 20-year-old from Saskatoon, Sask., scored 9 goals and 17 assists in 38 games with the Rebels this season while carrying the title of Team Captain. In 226 career WHL games, the 6-foot-0, 185-pound center has 58 goals and 73 assists for 131 points, as well as 203 penalty minutes. He has played 14 career playoff games, scoring twice and adding two assists

Zummack, a 15-year-old prospect from Kelowna, B.C., was the Rebels’ second round (36th overall) choice in the 2015 WHL Bantam Draft. This season, in 24 games with the Okanagan Rockets of the British Columbia Major Midget League, the 5-foot-9, 165-pound forward has 5 goals and 22 assists.

“Eli Zummack is a skilled offensive forward that our scouting staff held in very high regard during last year’s bantam draft,” Speltz continued. “He was taken high in the second round and has had a strong season this year.

“Most recently, Eli was a First Team All-Star along with Chiefs prospect Ty Smith at the (Western Canada U16 Challenge Cup) in October, a tournament that featured all of the best WHL Prospects from B.C., Alberta, Saskatchewan and Manitoba. We are very excited to have Eli be a part of the Chiefs team in the future.”

Spokane also acquired Red Deer’s second round selection in the 2016 WHL Bantam Draft and their fifth round pick in 2017.

“The two draft picks acquired in the deal will also help our scouting staff build for our future teams.”

Helewka, a 20-year-old forward from Burnaby, B.C., has 16 goals and 13 assists in 19 games since returning from an ATO with the San Jose Barracuda of the American Hockey League. He was drafted by the San Jose Sharks in the fourth round (106th overall) of the 2015 NHL Entry Draft. In 210 career games with the Chiefs, Helewka scored 93 goals and 100 assists, including a franchise record-tying nine-game goal streak last season. He led the Chiefs in scoring during the 2014-15 campaign with 44 goals and 87 points.

“The Chiefs would like to wish Adam Helewka all the best with the Red Deer Rebels and in his goal to be a player in the NHL. Adam has taken great steps in Spokane, both as a player and as a person. We thank him for his contributions and wish him well.”

The Chiefs play back-to-back games in Portland over the weekend, taking on the Winterhawks at 7 p.m. on Saturday and 5 p.m. on Sunday. They next return to Spokane Arena to host the Regina Pats on Saturday, January 9 for Viva Las Vegas Trip Giveaway Night presented by Miller Lite.

Tickets for January 9 and all Spokane Chiefs home games are available via TicketsWest online at www.ticketswest.com and via the Chiefs’ Ticket Office over the phone at 509-535-PUCK.