A sold out crowd of 7,075 fans packed Spokane’s Avista Stadium and saw the Chiefs defeat the Kootenay Ice 11-2 in the WHL’s first ever outdoor game.  The Chiefs evened up the home and home series with the Ice after earning a win in the Rockstar Outdoor Hockey Classic.

The game, which was watched locally on SWX and in Western Canada on SHAW Cable, began after three legendary figures in Spokane hockey history dropped the ceremonial first puck.  Former Allan Cup Champions Don Schereza and Dwight Carruthers, who played for the Spokane Jets and Flyers respectively in the 1970’s, were joined by former Chief Joe Cardarelli at center ice.  The pre-game was atmosphere was punctuated by a flyover from the 92 Air Refueling Wing at Fairchild Air Force Base.

Near perfect weather and the scoring output by the home club kept the capacity crowd involved through all 60 minutes.  A fireworks spectacular presented by TicketsWest highlighted the post game ceremonies.

Following the game, fans were treated to three different giveaways, a commemorative ticket, a poster of the opening ceremonies presented by Washington Trust Bank and The Rypien Foundation, and a coupon for a Chalupa at Taco Bell thanks to Spokane scoring more than five goals.

Spokane’s Collin Valcourt scored the game’s first goal at 4:20 of the first and 4-0 lead was built by goals from Steven Kuhn, Brenden Kichton and Tyler Vanscourt.  Kootenay scored their first of the game at 19:17.  Six more goals in the second pushed the lead to 10-1 after two.  Each team scored once in the third for the final 11-2.

The Ice beat Spokane 6-2 on Friday night in Cranbrook, BC.

Spokane finished 3-5 on the power play and 4-4 on the penalty kill.

The Chiefs will travel to Everett on Sunday for a 6:00 puck drop.  Mike Boyle goes on the air on 1510 KGA at 5:30 with Comcast Hockey Tonight. 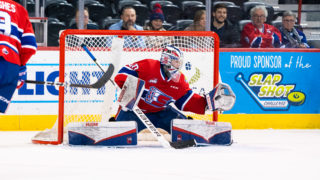