Spokane, Wash. — Playing their first game on their home ice in nearly three weeks, the Spokane Chiefs treated their fans to a 4-1 victory over the division rival Portland Winterhawks Friday night.

The Chiefs opened the scoring at 13:33 when Carter Chorney parked himself netfront to clean up a Mike Ladyman shot attempt to put Spokane on top 1-0. Just over a minute later, Eli Zummack flashed some nifty stick work, pulling off a hesitation move to make a Portland defender miss before firing one past Winterhawks goaltender Dante Giannuzzi at 14:42 for a shorthanded goal to extend the lead to 2-0 headed into the first intermission.

The Chiefs added to their lead in the second period when rookie forward Adam Beckman capitalized on a power play opportunity, firing a shot on net from the center of the right circle that rolled off of Giannuzzi’s glove and into the net to make it 3-0 Chiefs at 13:57.

The two sides traded goals in the third period, the first of which coming off the stick of Portland’s  Joachim Blichfeld 42-seconds into the final frame. Nolan Reid countered for Spokane at 14:29 to put the Chiefs up 4-1, which is where the scoring ended for the night.

Chiefs’ goaltender Bailey Brkin stole the show for the Chiefs, who were down a pair of defensemen, tying a season high with 36 saves on 37 Winterhawks’ shots. Over his last three games, Brkin has saved 101 out of 105 shots on goal, good for a save percentage of 0.962.

The Chiefs are back in action Saturday night as they host the Tri-City Americans for the first time this season. Mike Boyle will have the radio call on 1510 KGA, beginning with pre-game at 6:30 p.m. PT and puck drop at 7 p.m. PT.

Saturday night’s game will be Leinenkugel’s Hocktoberfest with fans able to enter the Arena at 4 p.m. PT to partake in Bavarian-themed festivities including live music, special Bavarian-themed food vendors, and activities for Chiefs fans of all ages! Tickets are on sale now online via TicketsWest, over the phone at 509-535-PUCK and in-person at the Chiefs’ Ticket Office. 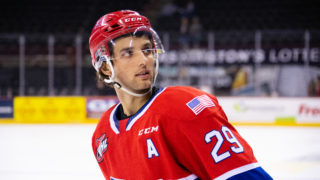