Spokane, Wash. — The Spokane Chiefs lost their first of four match-ups against the Vancouver Giants 6-4 on Wednesday night at Spokane Arena.

Vancouver got on the board first at 13:03 in the first period with a goal from Matthew Edwards — his first of the season.

Spokane was quick to answer, though, as Berkly Catton picked up the puck from Chase Bertholet along the bench boards and brought it to the slot, where he fired it over the left shoulder of Brett Mirwald to even the score. Defenseman Saige Weinstein also earned an assist on the play.

Catton now has points in all three of his games since his return from the World U-17 Hockey Challenge.

Zack Ostapchuk put another in the net for Vancouver to close out the first period at 2-1, Giants.

Ethan Semeniuk widened the gap to 3-1 at 3:42 in the second period, but Spokane kept the Giants at bay for most of the remainder of the frame.

This time it was Carter Streek who answered the call, tapping in a perfect feed from Cade Hayes from behind the net. The play marked Streek’s fifth goal and sixth point in the last six games.

We’re going STREEKING! Carter makes it 3-2 at 14:53 with assists for Hayes and McIsaac!

Defenseman Ben Bonni then notched his second of the year at 16:47 to tie things up for the second time in the game at 3-3.

The even score didn’t last long, though, as Ostapchuk found the twine for the second time of the night at 17:16 to make it 4-3 heading into the break.

The Giants added on at 5:38 in the final frame on a power play goal by Colton Langkow.

Rookie forward Tommaso De Luca brought the Chiefs within one at 16:40 with help from Blake Swetlikoff, but it wasn’t enough as Vancouver sealed the deal with an empty net goal to cap the scoring at 6-4.

Cooper Michaluk started in net for Spokane and turned aside 26-of-31 shots.

Up next, the Chiefs will travel to Kennewick to take on the rival Tri-City Americans Saturday, November 26 at 6:05 p.m.

The Chiefs’ next home game is Sunday, November 26 versus the Everett Silvertips. It’s the Winter Warmth Clothing Drive — bring new or gently used coats, gloves, hats, etc. to the game or to the Chiefs Ticket Office before the game!  All winter clothes will be donated to Catholic Charities’ St. Margaret’s Homeless Shelter. Tickets for November 26 and all regular season games are available online at spokanechiefs.com/tickets. 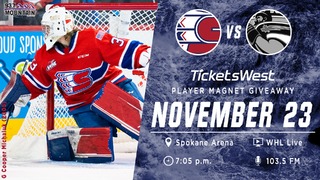