It was the Blazers who scored first as rookie forward and Kamloops product Logan Stankoven ripped his first career regular season goal past Czech netminder Lukas Parik – making his first start as a Chief – at 19:18 of the first period.

The lead was short-lived as the Chiefs responded just 15 seconds later – at 19:33 – when McGrew chipped the team’s first goal of the 2019-20 campaign into the back of the net. A stretch pass found Eli Zummack posted along the left side, from which he deflected the puck to a speeding Adam Beckman, who found McGrew streaking down the right wing for the tying score.

The Chiefs took their first lead of the season early in the second period as Connor Gabruch squeezed through a rebound at 2:30, with assists to Bobby Russell and Cordel Larson. Kamloops responded in kind as Sean Strange fired one past Parik from the left wing at 13:20.

Spokane regained the lead with 1:04 left in the middle frame as Bettendorf, Iowa native Luke Toporowski flew down the left wing and went to his backhand to flip a beauty past Blazer netminder Dylan Garand. Larson and Russell each picked up their second assists of the night on the play.

The back-and-forth affair continued midway through the third veteran forward Connor Zary scored for Kamloops, deflecting the puck up and over Parik’s shoulder off a perfect centering feed from Kyrell Sopotyk.

The Chiefs got the last laugh as McGrew once again spoiled the Blazer momentum, this time scoring just 17 seconds after the home team’s goal to regain the lead a 4-3. A late power play chance for Kamloops proved tenuous but Spokane held on for their first win of the season.

Spokane outshot Kamloops 37-34 on the night. The Chiefs went 0-for-6 on the power play and 3-for-3 on the penalty kill.

The Chiefs will round out their two-game opening road trip in Kelowna on Saturday night. Mike Boyle will have the radio call on 103.5 FM The Game. 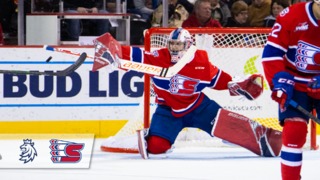