Chiefs shut out against Winterhawks on the road, 3-0

Spokane, Wash. – Penalties proved to be the Chiefs’ downfall in Sunday’s 3-0 shutout loss to the Portland Winterhawks. Spokane committed 12 penalties throughout the game, including seven in the final frame alone.

All three of Portland’s goals came in the first period. The Hawks struck right out of the gate with a goal from Jack O’Brien at 2:40.

The Winterhawks scored a power play goal late in the period after Chiefs forward Grady Lane found himself in the box for unsportsmanlike conduct. Robbie Fromm-Delorme found the back of the net with help from Aidan Like and Gabe Klassen. Right after that, at 18:49, Luke Shelter connected to Cross Hanas for Portland’s third goal of the period and what would be the last goal of the game.

The last two periods were physical, with 17 combined penalties between the teams. The Chiefs had a couple good looks, but dazzling saves from Portland’s Dante Giannuzzi (29-for-29) kept them at bay.

Campbell Arnold got the start in the net for the Chiefs, but was replaced by Mason Beaupit in the second period, who turned away all 24 of Portland’s shots for the last 40 minutes of the game. The Chiefs went 0-for-3 on the power play and logged 24 penalty minutes themselves. Portland outshot Spokane, 32-29.

Next, the Chiefs will travel back to Kennewick on Friday to take on the Tri-City Americans at 7:05 p.m. PT.

The Chiefs’ 2021-22 regular season continues on Sunday as they visit Portland to take on the Winterhawks. Mike Boyle will have the call on 103.5 FM The Game with puck drop at 5 p.m.. The Chiefs’ next home game is Friday, October 29 versus the Seattle Thunderbirds. It will be Garage Sale Night at the Arena with a rare opportunity to purchase Chiefs promotional items, signage and more. Tickets for October 29 and all regular season games are available online at spokanechiefs.com/tickets. 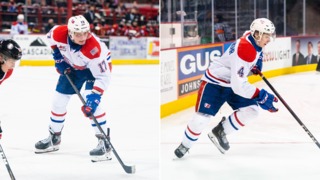