A consistent offensive force all season, the Minnesota Wild prospect was the lone WHL skater to crack the 100-point plateau this season, posting 107 points (48G-59A) in 63 WHL regular season games.

Statistically, Beckman led the WHL in goals and finished tied for third in assists. He was second in the WHL with 16 power-play goals and second with nine game-winning goals.

“Even though the season was abbreviated, we saw some great performances this season and it gives me great pleasure on behalf of Kubota’s employees and the Kubota dealers across Canada to congratulate Adam Beckman as this year’s WHL Top Scorer. Well done, Adam!”

Beckman found the scoresheet in 52 of his 63 appearances while setting the league’s top total. The Saskatoon, Sask. product spent time at the top of the WHL’s scoring race throughout the season before permanently taking over the lead at the start of February and holding it through the conclusion of the 2019-20 WHL Regular Season.

After registering an assist for his 100th point of the season on March 4, 2020 in Edmonton, Alta., Beckman recorded seven points (4G-3A) in his final three games to further cement his spot at the top of the leaderboard.

Throughout the season, Beckman’s torrid scoring pace was highlighted by an 18-game point streak from December 7, 2019 to January 25, 2020, where he tallied 33 points (21G-12A) for the league’s longest streak of the season. Beckman also claimed the WHL’s longest goal-scoring streak this season, posting 16 goals in 10 consecutive games between December 7, 2019 and January 3, 2020.

Beckman joins exclusive company in his capturing of the Bob Clarke Trophy, becoming the first Chief to win the award since Mitch Holmberg (118 points, 2013-14) and just the third overall when including Ray Whitney (185 points, 1990-91).

The 6-foot-1, 174-pound forward has made a strong impression in his time in the WHL. In 132 WHL regular season games, Beckman has recorded 169 points (80G-89A), including 24 power-play goals, one short-handed goal, and 11 game-winning goals. The Chiefs originally selected Beckman in fifth round, 96th overall, of the 2016 WHL Bantam Draft.

The Bob Clarke Trophy, awarded annually to the WHL’s Top Scorer, is named after the WHL and NHL legend known to many as one of the toughest and most skilled to ever play the game. Clarke played two seasons in the WHL and captured the WHL scoring title in both those campaigns. The 1967-68 WHL season saw Clarke collect an astounding 168 points (51G-117A) in 59 appearances. During the 1968-69 season, Clarke registered 137 points (51G-86A) in only 58 games as he helped his hometown Flin Flon Bombers claim the 1969 WHL Championship.

From there, the product of Flin Flon, Man., went on to play 15 NHL seasons with the Philadelphia Flyers, including captaining the Club to two Stanley Cup Championships. He was awarded the Hart Trophy as NHL MVP on three occasions and was named an NHL All-Star four times.

As the recipient of the Bob Clarke Trophy Presented by Kubota, Beckman is now one of three nominees for the Canadian Hockey League’s Top Scorer Award. 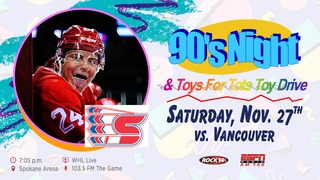